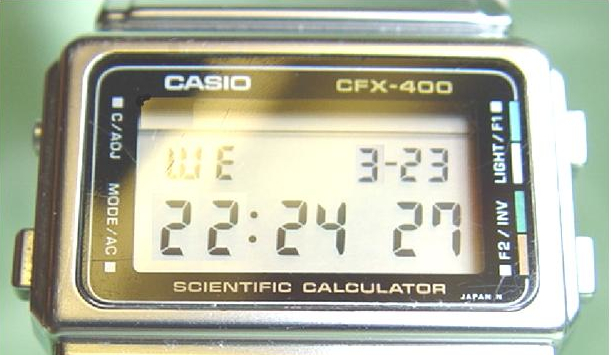 In 1981, we had wearable tech. At school, some of my friends had watches with apps. Casio were leading the wearable tech trend at the time. Apart from telling the time, there was a stopwatch, an alarm and a calculator. For a few months it seemed like the future was one where we would all have calculators on our arms.

Watches with apps didn't catch on. Until now. If anyone can create a trend that sticks, it's Apple. Will the Apple Watch go the way of Casio calculator watches? Or will we all have one (or a variant of one) in the same way most of us now have smartphones?

It's not about the watch.

The term "wearable tech", or "wearables" suggests that a new consumer product category is emerging. It is and it isn't.

Wearable tech is not what matters here. What will make a difference is not whether tech is wearable, it's whether it's integrated. The platforms that connect wearable tech with users - that's what really matters here.

It's about integration and ease of use

Tech innovation is at it's heart all about creating better systems. I mean systems in the widest sense of the word.

Wearables are an input/output point that can be used in various systems. The input is the sensors (accelerometer, thermometer, barometer, GPS, heart rate monitor etc). The output comes in the utility of apps. The apps use the sensors and multi-user data sets can be mined for insight.

Consumer adoption of these new systems is driven by a combination of three things; how useful it is, what we're willing to pay and how easy it is.

The last point is crucial; how easy are they to use?

Ease of use includes things like; not having to recharge or switch in or off sensors, data moving seamlessly across devices, insights being automatically suggested and brought to the user's attention.

Ease of use requires platforms and networks

Reducing friction in a process increases ease of use. In the modern world our biggest advances in technology adoption are when underlying infrastructure provides for reduced friction.

Think of examples from the 20th century; telephones, roads, air travel, GPS, the World Wide Web. All of these gave rise to a huge variety of systems and useful applications.

The 21st century is giving us new platforms; wifi connectivity, bluetooth, cloud storage, RFID. It's into this arena that wearable tech is entering.

What will ultimately matter most with wearables is how seamless and integrated we can make the user experience.

Here's a simple example. I currently carry a phone with me when I jog to measure my running workout. There's an app on my phone that shows distance run, route taken and time elapsed. That's pretty neat. The friction though is that I need to carry my phone. I'd rather carry nothing. I do wear a watch as well. If my watch could do the same thing as well as measure my heart beat and automatically transmit the data it to my phone via the cloud, I might just use that. It's less friction.

That's where Apple is headed. Not just health data but other uses like moving money and communicating. If they can remove the friction and integrate the experience into a wider lifestyle habit then we'll follow.

The difference between 1981 and 2014 is that we now have the platforms and network for integration.

It's not that wearables don't matter. They do matter. But what matters more is how these wearables are integrated. And that's all about the networks and platforms.

Startups and corporates that enter the wearables space will need to focus just as much on their integration as on the wearable.

Founders - What Are You Trying To Prove?

Not Steve Jobs, but actual jobs. (Although, today we are also reminded…