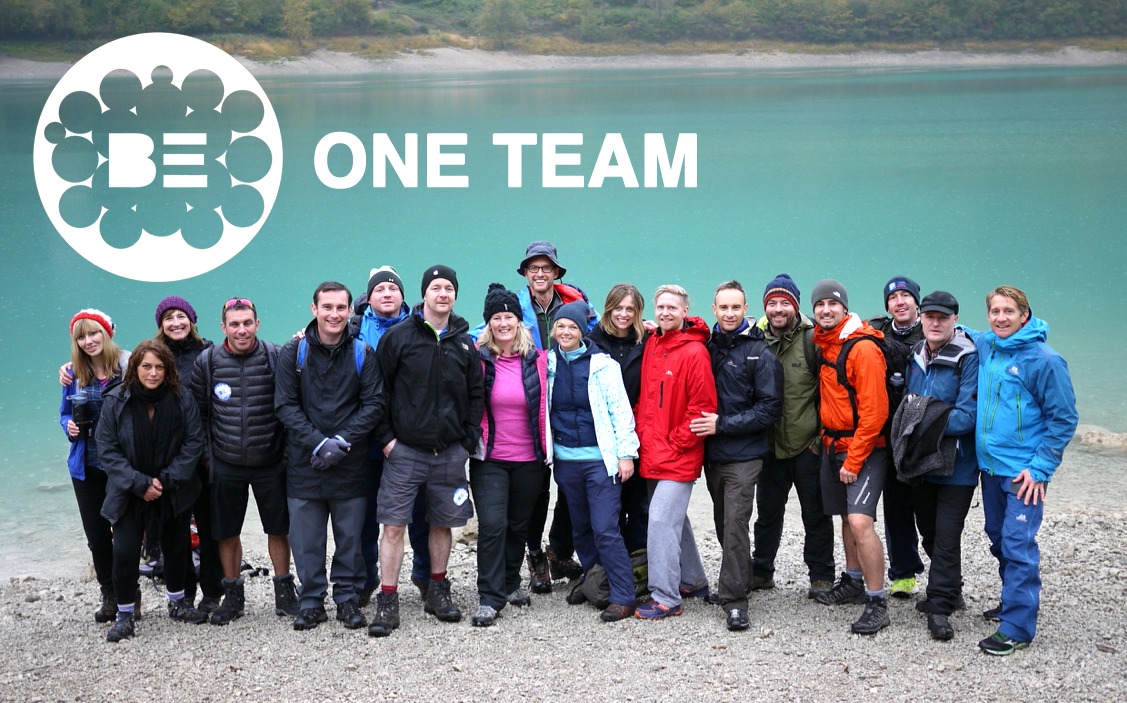 I wasn’t planning on jumping into the lake.

Standing on the shore afterwards, I was surprised how warm I felt. It was a cold October day and it was drizzling. My feet were grounded on the stony shore and the icy rush that I had felt only a minute before was completely absent. I started to hear the laughter and cheers from my companions who were as surprised as I was that I had stripped off my rain jacket, hiking boots and warm clothes to dash head first into the glacial water in my underwear. But it felt right, totally right.

We were at a secret location more than an hour but no less than two hours from Verona in Italy. Mountain peaks surrounded us and we had walked 15 kilometres to be at the lake. I was with my colleagues from the executive team at Holiday Extras, 19 of us in total. We’d traded our warm seaside office in Kent for the footpaths in the Italian hills for two days for a get together focussed around how we could become one team.

Be one team. That was our mantra for the trip. But how? What is a good team? What could being in the outdoors teach us? “Be one team” is one of our five core values. The others are Be at the helm, Be pioneering, Be the best version of you and Be courageous. (Jumping into an icy lake certainly required courage and not because it was icy).

We sought the help of Kim and Jake from Unknown Epic. Kim and Jake specialise in taking groups to surprise locations to connect with nature and learn something new on the way. Our briefing was simply a kit list and a cryptic letter hinting at a landscape of drama and a place that has stood for a thousand years.

Our coach dropped us off next to a field in the Italian hills. We followed some clues to walk through the forest to find an ancient castle which was to be our base for the coming days. It was nothing short of spectacular and set the scene for a magical journey we were to go on as a group. The family welcomed us to their castle and we were soon off and about on our first task; foraging for food. Luckily, there were apples and walnut trees to be harvested and so in the afternoon sun we worked in teams to bring in fresh ingredients.

The team at Holiday Extras have worked together for many years although this year there were a few newcomers, myself included. As the afternoon passed to evening, we came together for dinner and started to get to know each other better. After dinner we gathered outside around a fire pit for drinks and stories. Kim and Jake produced a world map and dots were placed on the map where each of us had stories to tell about courage and adventure. Andy won a coveted tin mug with his snowboarding story, a story where he decided to ask a cop for a ride home as he’d always wanted a ride in an American police car. Imagine the surprised look his wife must have had!

We started the next day in the dark and walked up from the castle to the orchard in our hiking gear and regrouped. Each of us carried a candle-let lantern to a spot with a wonderful view for a “morning service” where we drank coffee, watched the sun rise and mediated in a moment of quiet. Suitably charged with the fullness of the Italian country air, we headed inside for a hearty breakfast before starting our journey for the day.

There were two journeys that we went on that day. One was a journey of personal discovery, learning about ourselves and each other and about how we connect with each other as one team. The other was a walk through a beautiful and mythical glacial valley where we found solitude, quiet and beauty. Isolated, without traffic or settlements, it was once thought to be home to witches, a feared route for farmers to bring their produce to market.

This was a walking conference. A “talkabout” or “walkshop”. The format was that we were posed a simple question that we were to consider and talk about whilst we walked. The first question was “What is important to you about the team you work in/with?”. I partnered with two or three different people over the first hour or so to discuss this topic. As did everyone else. It was fluid. The conversation took as long as it took and then we’d swap talking/walking partners whenever it suited. Walking side by side and looking in the same direction we naturally talked as equals and with the same horizon, in our walking and in our talking. 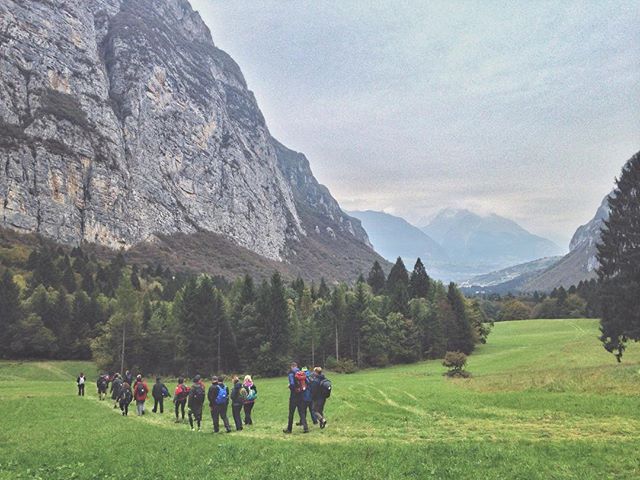 After a while (nobody looked at their watches, so I couldn’t tell you how long for sure) we found a clearing in a forest where there were some picnic tables. Putting these together we made a long open air board room. Instead of walls we have cliffs on either side. Instead of ceiling we had a few high clouds. We shared what we thought was important about a high performing team.

A common theme we found was “trust”. In order to perform we would need to encourage a culture of trust and to that we realised meant opening up to each other, being honest about how we are feeling and being true to ourselves. We agreed it was better to say “I don’t know, I need help with this” rather than worry about losing face and pretending you knew the answer. Trust requires emotional safety and it requires accepting people for who they are so that they feel comfortable to share with you. To do this requires accepting yourself and knowing your strengths and limits.

Our next question as we set off from the clearing was “How do you get the best out of me”. Again, we paired up, finding out how our colleagues liked and needed to work. This exercise required us to be honest and therefore to trust the other person. I remember explaining for example that I struggle to keep numbers in my head and so if I need to go to a meeting where we are going to talk metrics, I welcome advance warning so I can prepare my notes in advance. Someone else said they really needed to understand the “why” in any project and want you to keep to the point, don’t confuse them with detail.

We regrouped at the top of a hill in a mossy clearing in the forest. Logs were moved into position to create a circle and one by one we shared about how we like and need to work. I saw some real honesty in the group which showed that we were starting to trust each other. I also saw intense listening as each person shared their needs. Respect for each other hung in the still forest air.

Our final question took us over the brow of the hill to a fantastic view, down the other side to a medieval village and onwards to the icy lake. It was “What is your superpower?” In other words, the one thing that you’re really good at, the special skill that you can bring to the team. Again, we discussed this in pairs, with different people and started to recognise our strengths individually and in others. It sounds obvious, but knowing the special skills of your team members means you can ask for help when you need it and contribute when you can, a great basis for strong team work.

The superpowers were shared on a grassy knoll in front of the icy lake. They were funny, authentic and useful. At that moment I was intensely proud of the journey we’d taken, on foot and as a team.

That lake was cold. In my head a challenge had been set. Could I, would I, strip off and jump in, 2 months into a new job in front of a new team? I’m not sure where the idea came from but once it was there it wouldn’t go away. I wasn’t afraid of the cold or getting wet. The biggest barrier was whether I felt accepted by the team and if I trusted them. I told myself that if I really trusted them, they would accept me for being who I am, perhaps a little crazy and built like a stick. So I had to do it. Because I trusted them.

The warmth I felt on the beach afterwards was both physical and emotional. Physical because the air felt warm after being in icy water and emotional because I now truly felt part of the team.

We laughed together at dinner, a lovely evening in front of an ancient fireplace.

On the final morning we put our newly rebooted team skills to the test in a challenge set for us by the host family. Theory on teamwork over, now it was time to practice. In what can only be described as the great Italian bake-off, we formed teams of five. Our mission; to cook pizza on an open fire. Having navigated to a secret spot we found fire making materials and had to create our own firepits. Pizza dough was crafted and then cooked on the embers and we created traditional pizza with local organic ingredients. I saw a step change in how we communicated with each other following our learning from the previous day.

Much hilarity ensued as we presented our creations to our judges, our hosts. Team “Randy” took the prize, their team name inspired by the donkey we christened in the stables next door.

We regrouped to reflect on our mini-adventure and the lessons learned. We vowed to bring the mountains to the board room. Then, we had a final lunch, thanked the family and had to leave for the airport and head home.